Traders are selling corn expecting that USDA will hold US 2020/21 end stocks steady at 1,502 Mil Bu with February. ARC Research sees a 50/50 chance that WASDE will raise its US corn export estimate by 50 Mil Bu to 2,700 Mil Bu to account for record large world corn imports by China.

Key in today’s USDA March report will be South American crop sizes and whether WASDE leaves Brazil at 133 MMTs and Argentina at 48 MMTs. Weather during February and early March has been detrimental to yield, but traders are betting that WASDE will wait for real harvest data before adjusting in April.

Importers and domestic end users hope for a bearish WASDE report to produce CBOT break ahead of the increase in CBOT position limits that starts Monday. Fund managers are anxious to expand their risk ahead of Northern Hemisphere spring seeding season and will see a post report break as an opportunity.

The Brazilian real fell sharply vs the USD late Monday as Brazil’s Supreme Court affirmed that prior President Lula’s carwash scandal was abated opening the way for his return to politics and run for President next year. The real fell to near 6:1 vs the greenback and pushed Brazilian soybean prices in their local currency to historical highs. The weakening real pressured November soybeans on the prospect of a sizeable gain in 21/22 Brazilian seeded acres.

The Argentine weather forecast is warm/arid for the next 6-7 days with a chance of rain in the March 17-20th timeframe. Rainfall totals are estimated in a range of .1-.9” with coverage of the crop area no better than 50%. Mostly dry and seasonal weather returns in the 11-15 day forecast period.

Northern Brazil holds in a near to above normal rainfall pattern for the next 10 days with heavy rains offered in the 10-15 day period. Harvest operations will be labored while the new winter corn crop needs sunshine. High temps hold in the 80’s to the lower 90’s. Any winter that is seeded after today is likely to endure a yield drag as the dry season starts during the first half of May.

Good luck with the USDA March Crop Report. ARC’s bet is a benign report with CBT futures initially selling off, then rising on the prospect of new money being pushed into the CBOT next week with S American crops in decline.  Look to secure a break in CBOT corn, soymeal and wheat on a post report decline.

South American Weather Pattern Discussion: The primary forecast models maintain a near to above normal rainfall for N Brazil while RGDS/Argentina holds in an arid trend. The models agree on the pattern and outlay of South American rainfall for the next 10 days, which elevates our forecast confidence.

The overnight Argentine forecast is warmer. The recent Argy heat will be slow to end with the models pushing back the arrival of seasonal temps until the weekend. The additional heat will stress crops for another 5-7 days along with just a few spits of rain. Lite rains are indicated in the March 17-20th period.

The rain is focused on SW Argentina with crop area totals ranging from .1-.9”.

The attached 10-day rain forecast from the GFS model. The forecast offers 10-day Argentine rain totals of .25-1.50” with coverage no better than 45%. The next 7 days are dry with the next chance of rain being early next week. The 11-15 day period offers a below normal rainfall trend with seasonal temperatures.

Near to above normal rain will persist across N Brazil which will slow the soy harvest and seeding of the winter corn crop. High temps will be in the 80’s/90’s. The trend is wetter in the 10-15 day period with 2-6.00” of rainfall. 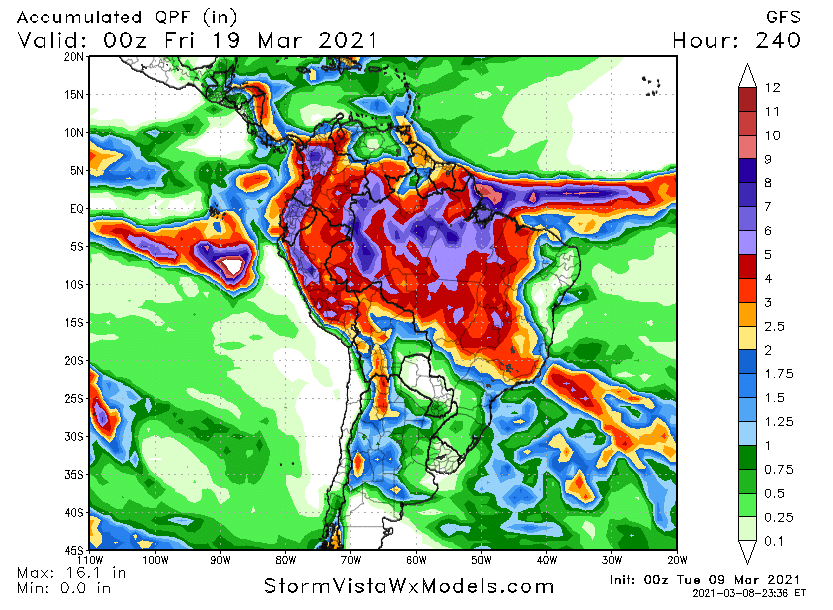 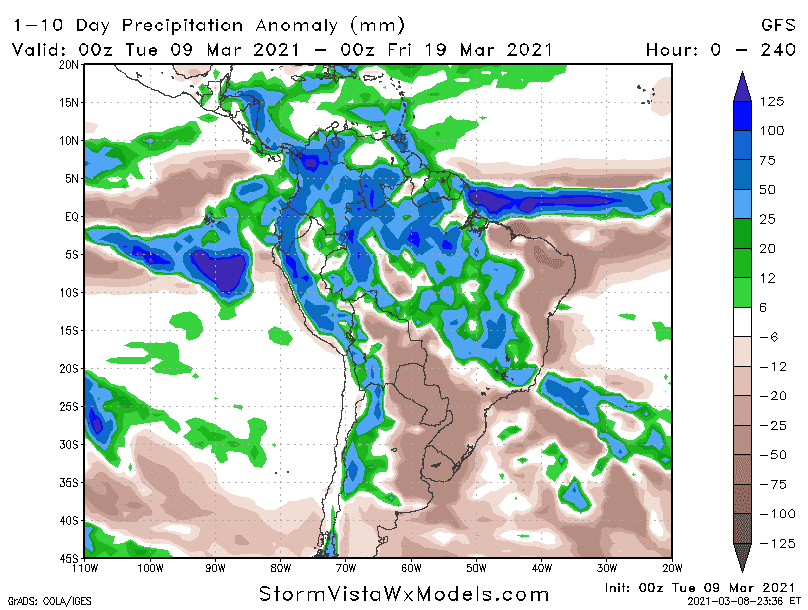 Overnight Forecast Slow to Cool Down Argentina This Week: 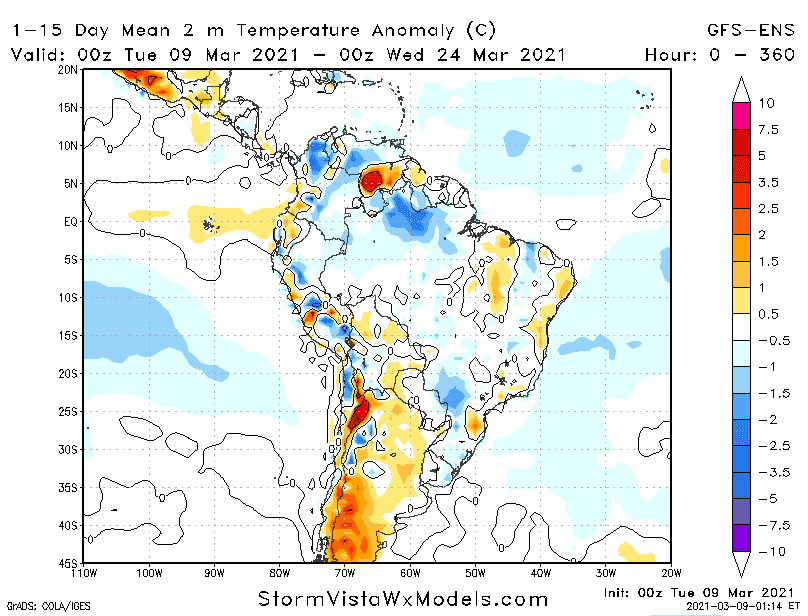 No indication of a return of Winter Temps into March 24th for Plains/Midwest: