A good portion of Thursday’s decline was due to high levels of the US/China Gov’t exchanging political barbs in full theater in Anchorage Alaska. CBOT traders worried that the open and viewable confrontation would cause a breakdown in relations, and China’s withdrawal from its Phase 1 Pledge.

However, there was no breakdown and talks will continue today. Like 2 boxers ahead of a prize fight, the harsh talk/rhetoric will be used to each side’s advantage with some sort of future political dialog being carved out.  Phase 1 ag demand from China will continue, but at risk is that the harsh rhetoric could lead to a slower than desired start of Phase 2 negotiations. The Phase 1 deal was a 2-year pact that will need to be renegotiated by 2022.

Including announced US corn sales to China this past week, the US has now sold more than 2,500 Mil Bu of US corn or 96% of the USDA annual forecast. And with a drought threatening the Mexican corn crop, the US is in position to export 3,000 Mil Bu of 2020/21 corn for the 1st time in history.

In world markets, Paris May wheat futures are unchanged at €220.50/MT, Malaysian April palmoil futures lost 67 ringgits at $4,013 RM/MT, while China’s Dalian corn and soymeal futures settled mixed heading into the weekend. May Dalian corn closed 1 cent higher at $10.67/Bu while May DCE soymeal fell $2.50/MT to $599.80/MT. Most see China’s ag ministry statement of cutting back of corn/soymeal in feed rations as a desperate act with few hog or poultry producers willing to use any portion of China’s massive rice reserve stores. And is China’s feed consumption rate so large that they have already worked through a comfortable level of wheat feeding? Time will tell.

The US/world farmer will not be selling the break which is further tightening cash availability. As the saying goes; “Bull markets always let you in!”

South American Weather Pattern Discussion: The weather models agree. This raises our confidence in the 10 day forecast. A high-pressure Ridge dominates NE Brazil which will produce warm/dry weather for most of Central and Eastern Brazil. This is worrisome long wave pattern for the winter Brazilian corn crop.

The 10-day rainfall forecast is from the European model. The NE Brazilian high- pressure ridge is forcing upper air humidity southward into Argentina and RGDS in Southern Brazil. Mostly dry weather will prevail for the remainder of the week before a new system pulls across Argentina on Sunday/Monday producing .4-1.50” of rainfall over the northern 2/3’s of the crop area. A second system is evident for late next week is weaker and will only produce .1-.7” across Southern Argentina. Below normal temps are featured over the next 2 weeks.

Dry weather is forecast for N and E Brazil with the 6-10 day period showing little or no rain. The 11-15 day holds onto the drier trend raising the concern for the winter corn crop. No extreme heat will be felt, but highs in the 80s to low 90s will cause a significant fall in soil moisture. The NE Brazilian high pressure Ridge holds into early April which will maintain an arid N Brazilian weather. 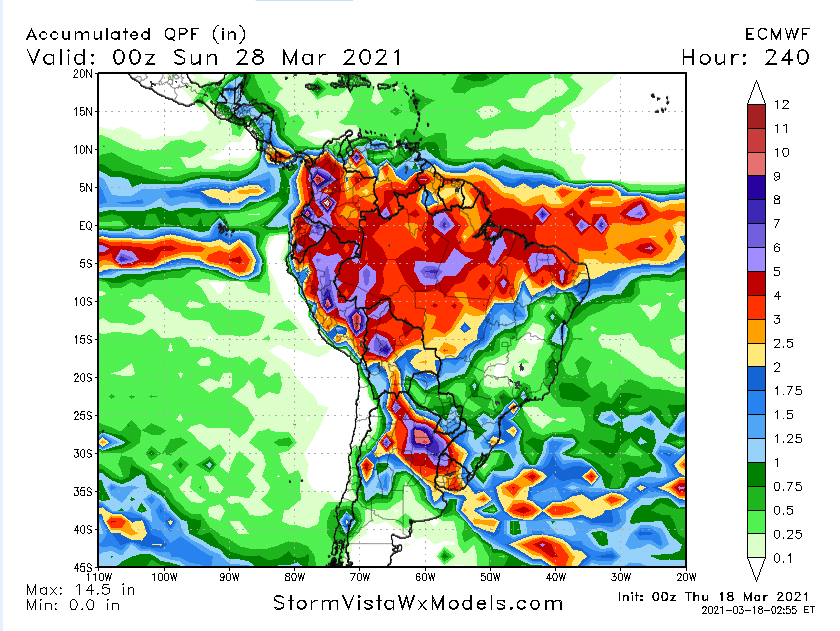 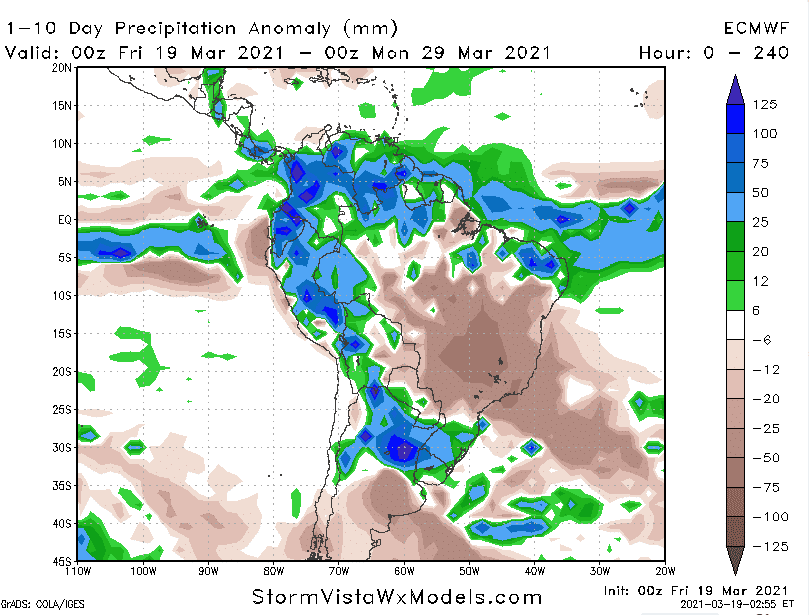 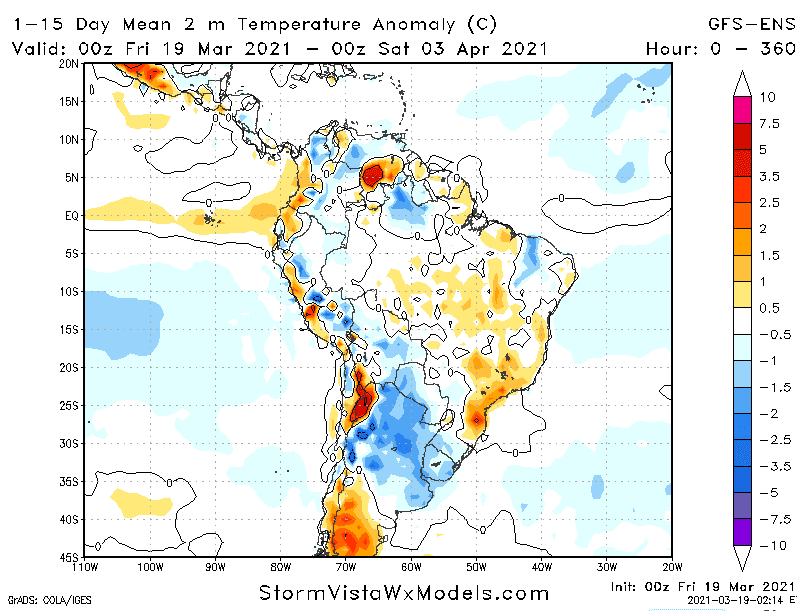 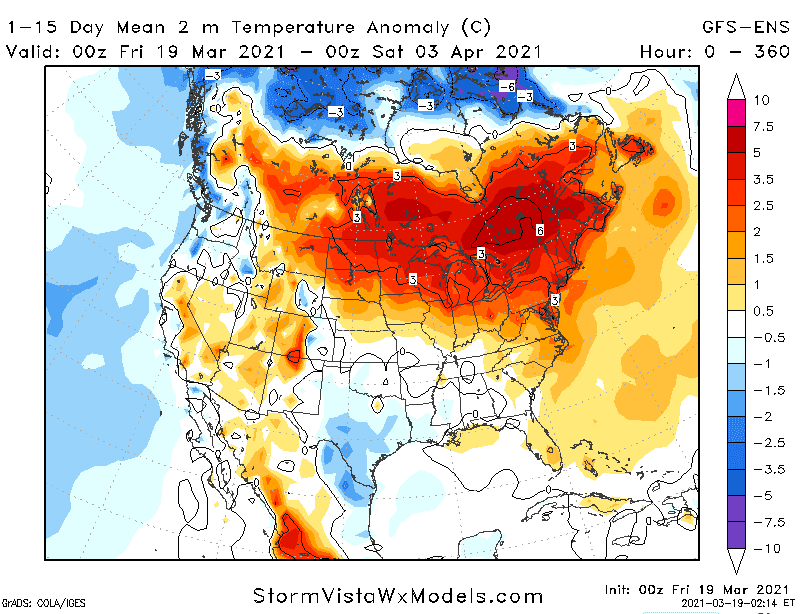 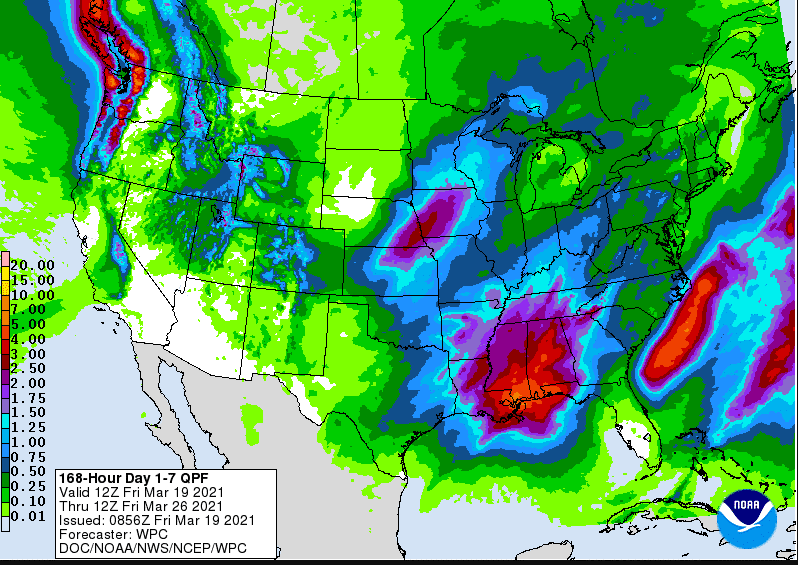