AgResource AM CBOT Comment & Analysis: Good Morning! CBOT futures are mostly higher to start the week on threatening South American weather, the anticipation of another round of US corn sales to China and a proposed hike in the Russian wheat export tax for June 1st. The volume of CBOT trade has stayed active with more than 34,000 contracts of March corn and more than 22,000 contracts of March soybeans changing hands.

Global and US financial markets climbed to start the week as concern over volatile retail trading receded and China took steps to ease a cash crunch.  Silver prices exceeded $30/oz for the 1st time since 2013 in a Reddit-fueled buying frenzy. The US Dow is expected to open 250 points higher in a recovery from Friday. The financial markets offer a bullish tailwind for CBOT grains.

Exporter rumors from Moscow over the weekend indicated that the Russian Gov’t is planning to raise and continue export taxes on wheat in a formula basis. Russia is said to be considering a $70/MT tax on prices above $200 on June 1st.  The duty is substantial, and exporters have halted fob offers from February 15thwhen a €25/MT tax is first installed, which rises to €50/MT as of March 1st. A tax of 70% above $200/MT is being argued as onerous by multinational exporters. Today’s fob wheat price of $300/MT would translate into a $70/MT tax which is substantially above the €50/MT tax as of March 1st. The Russian tax will shift demand to other exporters – including the US and Canada.

India announced that it dropped its crude palmoil import duty by 12.5% to 15% while also cutting soyoil/sunoil import duties by 15% to 20%. The cut in import duties is likely to spur additional import demand in February (vs Jan).

The Brazilian trucker’s strike has commenced, but it lacks groundswell support to block major roadways. Moreover, the Brazilian soybean harvest is delayed into the last half of February allowing fee negotiations to occur.

South American Weather Pattern Discussion: The primary weather models agree which raises our confidence in the 10-day forecast.  Additional rainfall fell on Sunday across W and N Argentina (traces to .50”) and the Southern 1/3 of Brazil (.25-1.25”) while most of Northern Brazil held in a drier profile with just a few widely scattered showers (.1-1.00”).

The forecast models agree that on Friday/Saturday a pattern shift develops that produces a lasting dry weather pattern for the crop areas of Argentina while a near to above normal rainfall pattern evolves across most of Brazil. The wetter weather is unwanted across Brazil as farmers were hoping for dry weather to allow the commencement of harvest. Soy crop in Parana/Santa Caterina and RGDS have been fighting daily rain while it is becoming too late for rain to provide much yield benefit for Northern Brazil with crop dry down starting. ARC’s big concern is a new lasting period of dry weather for Argentina with warming temperatures in the 10-15 day period. Sunny and mild temperatures are forecast for the next 8-9 days.

The attached 10-day rainfall forecast map is from the GFS model. Note the limited rain forecast for the entirety of Argentina. This dry weather trend must be closely followed. 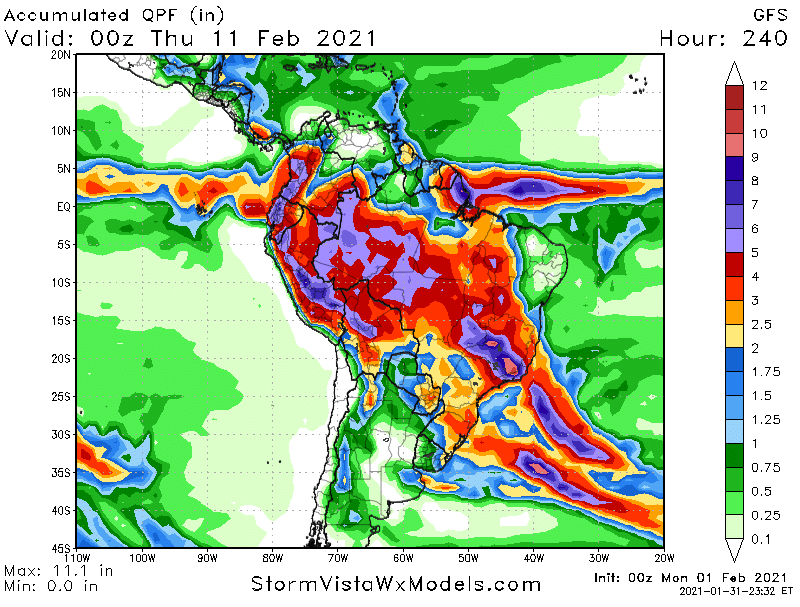 Cool Temps for the next 8-9 Days with  Above Normal Temps Following for Argentina: 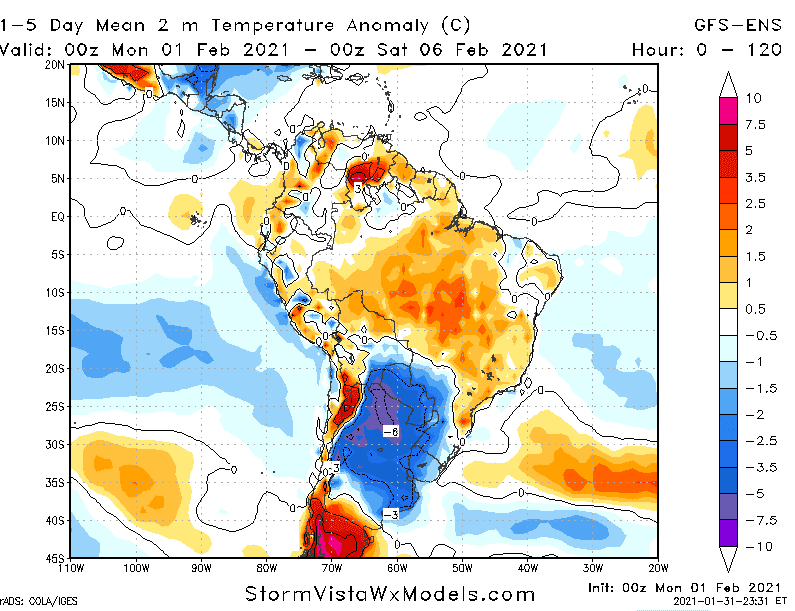 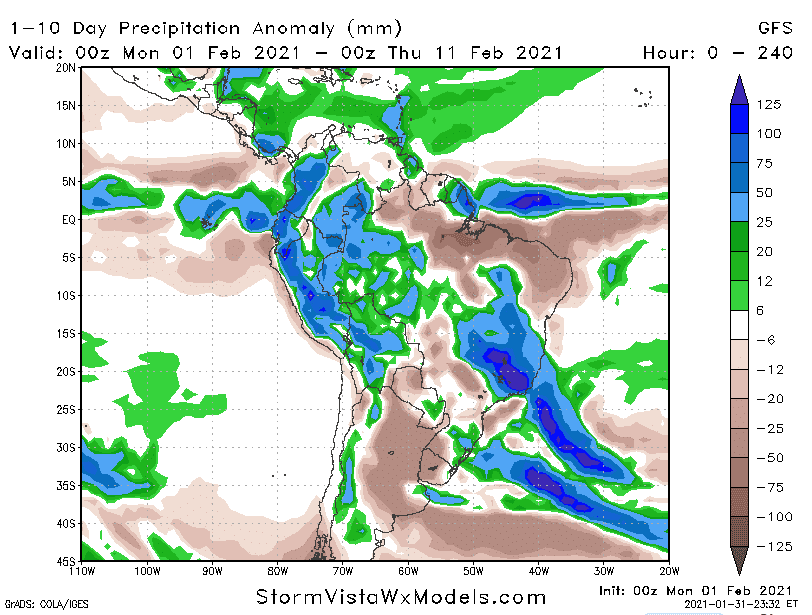